Clash of the clouds | The Economist

Cloud computing generates a lot of heated discussion, and through all the technical arguments, issues of security and trust,  and battles over control, one topic keeps getting overlooked: cost.

We will all eventually adopt cloud computing, simply because the current model of scaling servers up and down is very expensive. IT departments try to buy as many servers as they think they’ll need for computing power during estimated peak capacity. But we don’t need that capacity most of the time-- so lots of servers sit idle.

Cloud computing can reduce costs, becauses it provides more capacity during the peak times, so we simply pay for it on-demand. When the peaks are over and less capacity is needed, the cost then goes down. From a business perspective, this allows a company to move much of its infrastructure costs from being a capital expenditure (CAPEX) to an operating expenditure (OPEX).

The Economist published an excellent overview of how industry giants are reacting to this massive trend: 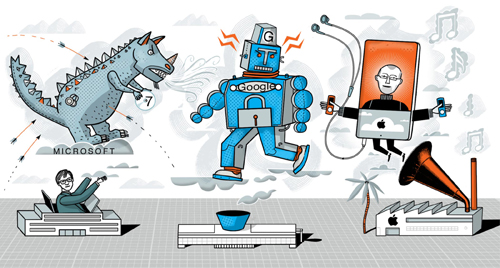 Clash of the Titans

"The rise of cloud computing is not just shifting Microsoft’s centre of gravity. It is changing the nature of competition within the computer industry. Technological developments have hitherto pushed computing power away from central hubs: first from mainframes to minicomputers, and then to PCs. Now a combination of ever cheaper and more powerful processors, and ever faster and more ubiquitous networks, is pushing power back to the centre in some respects, and even further away in others. The cloud’s data centres are, in effect, outsize public mainframes. At the same time, the PC is being pushed aside by a host of smaller, often wireless devices, such as smart-phones, netbooks (small laptops) and, perhaps soon, tablets (touch-screen computers the size of books).

Although Windows still runs 90% of PCs, the fading importance of the PC means that Microsoft is no longer an all-powerful monopolist. Others are also building big clouds, including Google, a giant of the internet, and Apple, renowned as a maker of hardware, with a market capitalisation that now exceeds those of both Google and IBM, its original arch-rival (see chart above).

Granted, there are hundreds if not thousands of firms offering cloud services—web-based applications living in data centres, such as music sites or social networks. But Microsoft, Google and Apple play in a different league. Each has its own global network of data centres. They intend to offer not just one or two services, but whole suites of them, with services including e-mail, address books, storage, collaboration tools and business applications. They are also vying to dominate the periphery, either by developing software for smart-phones and other small devices or by making such devices themselves."

Read the whole thing, of course... Cloud computing: Clash of the clouds | The Economist.