I heard Rudy Ruettiger speak at the ConnectWise conference marathon a couple weeks ago.  Yes, the Rudy of Notre Dame and Movie fame.  I received a signed copy of his book!  He started out saying, “Everybody wants to be somebody.  You are somebody.” 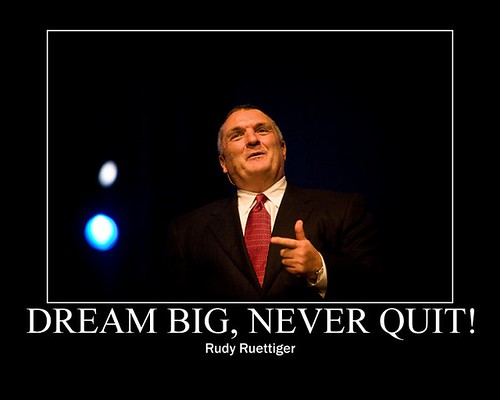 Rudy is an unassuming man – 5’ 6”, 165 lbs., stocky and frankly he’s not that great of a speaker.  Rudy is dyslexic and delivers an interesting – inspiring message.  The signature on the book is surrounded by:

Amen, I’m buying that stuff.  Never give up.  Believe for that miracle.  Believe in yourself.

Rudy says, “Many say that I’m not that great a speaker and did nothing really significant.  I say I’m up here and you 1,400 are sitting down there.  I’m getting paid and you’re not.”   He followed that up with, “ Joe Montana, Joe Theismann and Jerome Bettis were all Pro-bowl players who have Super Bowl rings – but they didn’t make a movie about them!”   Rudy played two total downs of football and made one tackle.  They made a movie about him!  Touché – good point – I’m listening. 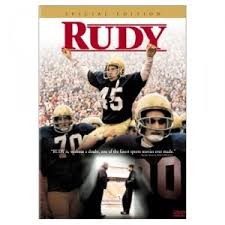 Rudy told a number of compelling stories.  Here’s a guy that had a serious learning disability – discovered at Holy Cross College – but grew up with a singular goal to attend Notre Dame and play on their football team!  He doggedly pursued that dream against all academic odds and clawed his way onto the practice squad football team.   Coach Dan Devine suited him up and put him in for 2 final plays in his final football game.  Rudy’s one of only two players carried off the Notre Dame football field on teammate’s shoulders!

He told about his trip to Hollywood to sell his movie story.  They asked him, “Why should we make a movie about you?”  He replied, "Because I went to Notre Dame, played one game, two plays and made one tackle.”  Right.  I don’t think so.

His life proves it.  Here’s a diminutive man, with learning disabilities, who performed no heroics of any measure, appears dwarfed by those around him – yet accomplished virtually every personal goal that he pursued.  I’m impressed.

Rudy told of his invitation to view the movie at the White House with the President of the United States – and the person that runs the White House – Hillary Clinton.  He talked about “goofy thoughts that pull us down” countered by, “It’s your attitude – how you see yourself.  People want to be around winners – champions’ attitudes.”

Rudy epitomizes his own statement: “You don’t have to be the best to be the best in your moment.”  Rudy chose his moments – he rose to the top of each of his moments in life.  He made the most of every minute opportunity.  And the final kicker – that Vince Vaughn and John Favreau made their acting and directing debuts in the movie Rudy.  Rudy says, “If I didn’t push my dream then they wouldn’t have their opportunity.”  Wow, good stuff.

The speech rambled a bit, contained a whole lot of clichés, then ended with the emotional tear jerking movie finale.   I saw that movie.

I love this stuff.  I think there’s a champion in each and every one of us.  It’s our own choice to seize the moment and make a difference.  Rudy lives that message.